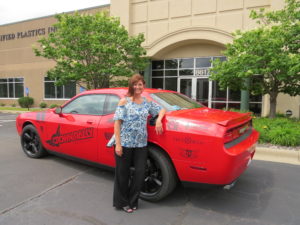 Sponsored by Diversified Plastics, Inc., Janel Rosine and her husband Greg participated for the first time in Crown Rally 2017 this past weekend. The 4th year the automobile event was held, the rally started at Landmark Center in St. Paul, and finished more than 1,000-mile away in Chicago.

Over 120 vehicles of all types, new and vintage, were entered in the event. The vehicles included everything from a Lamborghini, Corvette and a 57 Chevy to modern-day muscle cars, a Yukon Denali full-size SUV and Ford F150. 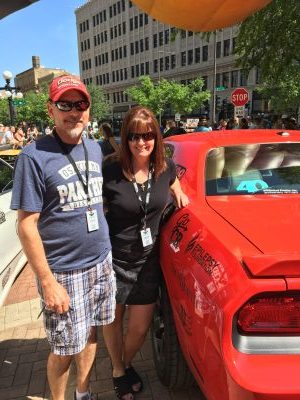 The entry fee for Crown Rally 2017 was $2,000 for each vehicle. The fee covered food, hotel and other expenses along with a portion being donated to charity. The organizations benefiting from the Crown Rally 2017, include the Epilepsy Foundation and Kars4Kids. Participants were also encouraged to secure additional donations. Diversified Plastics, Inc. was a significant supporter for Janel and Greg’s campaign. The fourth highest team for donations earned, Janel and Greg were given the opportunity to start in the fourth position.

Each team had a driver and a navigator. The age range of participants was 21 years and older. There were all types of teams, including father and son, husband and wife, brothers, women and friends.

Equipped with walkie talkies, Janel and Greg raced alongside friends also participating in a Dodge Challenger. During the race, the Zello app was used for communication with all participants. It proved helpful in notifying racers that certain restaurants were staying open later. Some areas along the journey did not have cellular coverage, making navigation for teams without a paper map challenging at times.

There were several checkpoints, seven on the first day and four the second day. At the checkpoints, teams were given coordinates, longitude and latitude, for the next destination. It was up to each crew to determine the best course for each segment of the race.

“The scenery along the course was beautiful,” says Janel. “In addition to seeing remarkable vehicles, we met many wonderful people with common interests. We found that younger adults, 25 and under, were interested in the muscle cars, like our Challenger.”

A timed event, the routes were driven by a member of event management to determine the approximate time or each segment of the race. The total time at the end of the race was added up to determine the winner. If a participant arrived at a checkpoint too fast, they were disqualified from the race. This encouraged adherence to speed limits and safety.

On Friday night, the vehicles were parked on the 3rd street bridge in Cedar Rapids, Iowa. The city closed the bridge for the night. The public was encouraged to visit and view the different vehicles. The festivities included a band and food catered by HyVee. Participants were shuttled from the bridge to the Doubletree hotel for the night.

The winner of Crown Rally North has not been announced. Crown Rally South, starting in Chicago and finishing in Nashville, will be held from August 25 through 27.