CEO Jim Dow, 81 signs off after selling his Diversified Plastics to his beloved employees 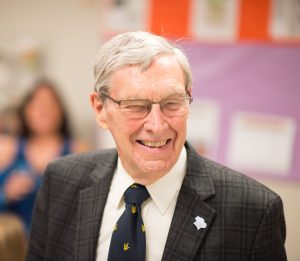 The Brooklyn Park firm has grown to 80 employees. It became a profitable company with revenue that should top $15 million this year.

Jim Dow, who just retired as a CEO at 81, probably deserves the Florida vacation this month as much as any boss I know.

Dow, who remains chairman of Diversified Plastics, lost his first career in the 1970s, after spending 15 years at the former Buckbee-Mears. His job as European director vanished when the electronics manufacturer pulled out of Europe. Dow, a Minneapolis native, Yale graduate and former Army captain, decided it was time to go to work for himself.

He bought a bankrupt plastics manufacturer and renamed it Diversified Plastics. Dow and his wife soon got used to sweeping the plant and cleaning the bathrooms on weekends, as the fledgling enterprise struggled to get its footing as a specialty manufacturer for the aerospace and medical industries.

“We were up to about 13 employees [during the 1981-82 recession] and business was tough,” Dow recalled. “I gave our people a choice: Cut people or everybody takes salary cuts. Our people said pay cuts and keep the team together. They gave, I gave.

“It’s always been a team. The one thing I guess I’m good at is hiring good people. This is like a second family to me.”

And the plan and all the elbow grease over the years worked.

Diversified Plastics of Brooklyn Park has grown to 80 employees. It became a profitable company with revenue that should top $15 million this year.

And Dow, working with adviser Chartwell Financial and an independent trustee, has completed the several-year sale of the firm to the employees through an Employee Stock Option Plan (ESOP).

Dow remains a non-employee chairman of the board.

There were prospective buyers, private equity firms and industry consolidators who offered more than the unspecified amount Dow got paid.

“Let’s just say I was paid more than $1 million,” Dow offered. “But I couldn’t go out and sell this company for more to people who I knew would not be loyal to the employees. They may have offered a job to all our people, but not necessarily. I could have made more money, but I made enough.

“From an economic point of view, the ESOP wasn’t the best thing for me. The people who appraised the businesses — Chartwell — tend to ‘down value’ the company because they don’t want to be accused by the government of lining the owner’s pockets.”

Dow financed the sale personally over several years and through a loan to the ESOP by Fidelity Bank.

Government tax rules allow an ESOP, which essentially is an employee retirement plan, to buy the company from annual pretax profits that otherwise would have flowed to the previous owner.

ESOPs work best when they are conservatively structured and when companies are growing and profitable.

Employees, including vested former employees, become owners through the ESOP. They cash out at retirement age, or sometimes when they leave the company, if they are vested. The funds can be rolled into an individual retirement account.

ESOPs, and the number of Americans who work for employee-owned companies, are on the rise. with more than 15 million people at 9,600-plus companies, according to the National Center for Employee Ownership.

Advocates say they are one of the best ways for working-to-middle class folks to build wealth through their labor during a period, dating to the 1980s, when wages have been fairly stagnant against inflation.

The sellers tend to get rich more slowly over a longer period of time than cash on the barrel head.

“Jim Dow created a safe environment for employees to develop new skills, take risks and learn,” said Annette Lund, who started as a receptionist years ago and is now a vice president. “Jim encouraged me to complete my degree and passed along his technical knowledge. He is a mentor and a friend.”

Dow also has been active with local community and technical colleges and programs that encourage students to pursue manufacturing careers.

“If I had been able to script [my career], I wouldn’t have changed anything,” Dow said last week from Florida. “Even the tough days, when my wife would go in to vacuum and clean bathrooms, or the worrying about making payroll.

“It paid off. I think the world of these people at Diversified.”