Proficient in producing high-precision, small-quantity parts, Diversified Plastics was selected because of the company’s extensive experience molding polyetheretherketone (PEEK) components for medical-device companies. Resistant to ultraviolet radiation, PEEK has a low outgassing profile when exposed to the high vacuum of space and features stiff, strong and lightweight characteristics.

“We are proud to be part of this mission,” says Annette Lund, vice president of Diversified Plastics, Inc. “Our in-house capabilities allowed us to perform all operations required and saved the customer time and money.” 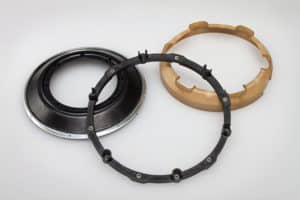 One of the parts required over molding PEEK around an aluminum ring. Another part contained twelve metal inserts machined by Diversified Plastic’s tooling division, Design Tool and Engineering. The inserts were press-fit into the molded plastic. The unreinforced part is an electrical shield to prevent arcing. Molded at approximately 700 degrees F (371 degrees C) in single-cavity tools, the parts measure 5 to 7 inches (127 to 178 mm) in diameter.

The first spacecraft to study Jupiter at such a close distance, Juno will travel 348 million miles (560 million kilometers) in orbit around Jupiter at different distances to get the best possible data and images under the planet’s cloud cover. The spacecraft was suitably named after the Greek god Jupiter’s wife Juno. Juno was able to see through the clouds to reveal the god’s true nature.